The Great Barrier Reef undergoes much scrutiny in reports that, typically, have a reef-wide or regional focus.

The Mackay–Whitsunday–Isaac Healthy Rivers to Reef Partnership recently took a much closer-to-home approach.

The first ever Mackay–Whitsunday–Isaac Stewardship Report 2018 is a community and industry response to waterway health issues.

It is a practice the other 4 reef regional report card partnerships plan to adopt annually.

To be read alongside the annual report card on ecological, socio-economic, and cultural heritage condition, the stewardship report showcased the varied actions partner organisations took in 2017–18 to protect or enhance water quality and ecosystem health condition in their region.

The stewardship report also highlighted the major achievements of that period and future priorities, in terms of management responses.

The Mackay–Whitsunday–Isaac Healthy Rivers to Reef Partnership is a collaboration between community, Traditional Owners, farmers, fishers, industry, science, tourism and government. Its region includes the catchments of the Don, Proserpine, O’Connell, Pioneer and Plane basins, the urban area of Mackay, the ports of Abbot Point, Mackay and Hay Point and the coastal and marine area to the eastern boundary of the Great Barrier Reef Marine Park. 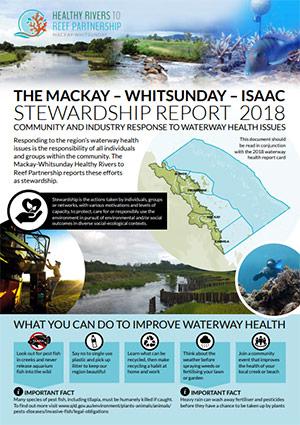