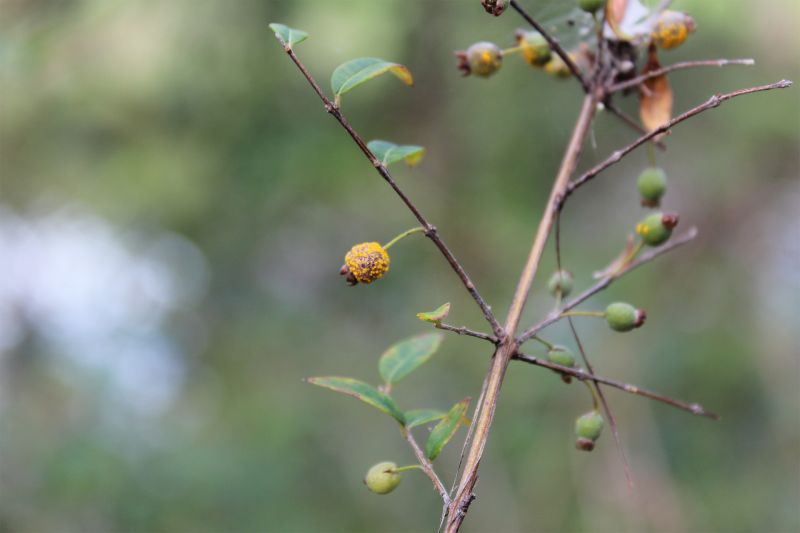 Myrtle rust, a fungal pathogen that attacks Myrtaceae and was introduced in 2010, has spread along Australia’s eastern coast, affecting culturally and ecologically significant species such as the paper bark (Melaleuca quinquenervia). While its spores disperse easily on the wind, it can also spread through the movement of people and infected plants.

First detected on K’gari (Fraser Island) in 2013, myrtle rust’s full impact on the island’s National and World Heritage values is currently unknown. A partnership with Queensland’s Department of Agriculture and Fisheries (DAF), the First Nations people of K’gari, the Butchulla people, and the Department of Environment and Science (DES), has resulted in development and delivery of a forest health surveillance program to raise local awareness and increase tracking of myrtle rust on the Island.

The Butchulla Land and Sea Rangers (BLSR) are developing skills in pest surveys through visits to sites on K’gari including Eurong, Boorangoora, Central Station, Kingfisher Bay, Eli Creek and Orchid Beach. These visits enable overall forest health to be observed and recorded, with myrtle rust found in several areas.

The final phase of training, expected to take place in late 2020, will include further pest and disease surveys.

On completion of training, the Butchulla Rangers will be equipped to monitor the island’s forest health, myrtle rust prevalence and contribute to the overall biosecurity of K’gari.

The Butchulla Land and Sea Rangers recently secured National Heritage Grant funding, from the Commonwealth Government, for a joint project with DES and DAF supporting the appointment of a BLSR Biosecurity Officer to focus on forest health and biosecurity, training, mentoring, and communications, and develop a seed collection and storage plan, contributing to the development of a conservation plan for K’gari.