At a reef-wide scale, climate related variables are already having an effect, and are predicted to have an increasing impact on the Great Barrier Reef's Outstanding Universal Value (OUV).

Climate change remains the most serious threat to the Great Barrier Reef. It is already affecting the Reef and is likely to have far-reaching consequences in the decades to come. Sea temperatures are on the rise and this trend is expected to continue, leading to an increased risk of mass coral bleaching; gradual ocean acidification will increasingly restrict coral growth and survival; and there are likely to be more intense weather events.

Climate change has both direct and indirect effects on the animals and plants that make the reef so special and the ecosystem and processes required to maintain their habitat.

Increasing levels of atmospheric carbon dioxide (and other gasses) will lead to air temperatures increasing (as these have the effect of a greenhouse surrounding the earth) which will flow on to increased sea temperatures leading to sea level rises (warm water expands) and a gradual change in the acid-base balance (or pH level) of sea water as carbon dioxide is absorbed. The changing water chemistry is expected to impact most on corals and the shells of animals as the lower pH levels dissolve these carbonate-dependent species.

Weather will become more severe. While the frequency of tropical cyclones is likely to decrease or remain unchanged, there is a possible trend towards more intense storms. Average monsoon rainfall may increase, causing more large freshwater inflows to the marine environment.

The vulnerability of the ecosystem to climate change flows through to dependent heritage values, especially the Reef’s OUV, natural heritage values and Indigenous heritage values. Altered weather patterns and sea level rises increase the risks to built structures such as light stations, shipwrecks and fish traps.

As the climate changes, coral bleaching is predicted to become more frequent and severe. Sea temperature increases and coral stress from other impacts increase corals' vulnerability to bleaching. In 2015, the northern section of the Great Barrier Reef experienced large scale bleaching; a stress response to higher than average water temperatures. Previous mass bleaching events have shown that significant coral recovery can occur even from severe bleaching events. Whilst a significant portion of the coral may actually die as a result of the bleaching, the corals that survive will be more tolerant of high temperatures in the future.

Climate change is predicted to have far-reaching consequences for the reef ecosystem and over the next 50 years, it is likely to significantly affect most components. 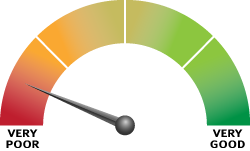 See an overview of gradings for World Heritage in the assessment summary.